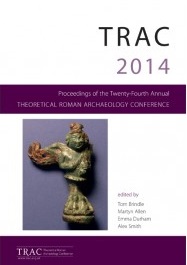 This paper discusses Roman military communities from the perspective of models for human capacity to create social networks. The adopted approach applies these models to consider how the scale of a military base impacted on the experience of being stationed there, and critiques them in the light of the available epigraphic data regarding professional associations in the Roman army. Each military base was a locale for a unique, web-like array of social bonds of different strength, formed in a variety of official and un-official contexts. From the perspective of a printed site plan, an auxiliary base is a miniature version of a legionary base, but in social terms the experiences of occupants at the different types of base would probably have been very different. A legionary would certainly know a fair number of people by name and visually recognise even more, but clearly not all of the five to ten thousand soldiers and dependants who made up a full legionary community. The discussion of social networks within the army has seen considerable interest: notably Greene’s (2013a; 2013b; 2012) papers on female social networks in the light of evidence fromVindolanda, Haynes’ (2013) and Pegler’s (2000) work on genii and collegia and Collar’s (2013) work on networks of worshippers of Jupiter Dolichenus. This paper aims to contribute to the discussion by considering the fort environment as the spatial underpinning for relationships within the military community and the interplay between physical and social distance. The applicability of models developed by social psychologists such as Robin Dunbar and H. Russell Bernard are tested and the results compared with modern military cohesion studies.