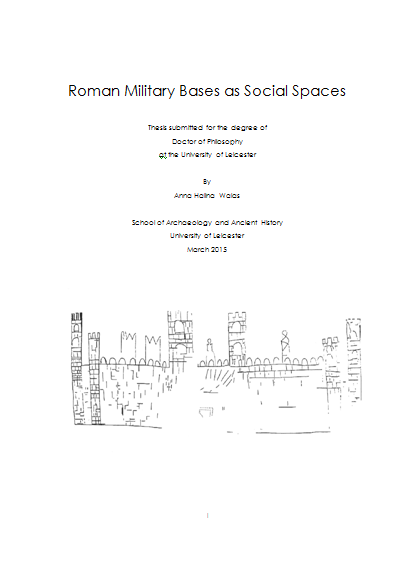 Anna H. Walas
Thesis submitted for the degree of Doctor of Philosophy at the University of Leicester, March 2015
Publication year: 2016

This thesis examines socio-spatio-temporal practices in Roman military bases between the first and third centuries AD. The thesis analyses archaeological, documentary and textual evidence in order to understand how the spatial setting of the military base was underpinned by socio-temporal practices associated with those built spaces. The archaeological data consists of two case-study military bases informed by insights from two additional sites. Elginhaugh provides the best known plan of a Roman military base in the Empire and a well stratified finds assemblage. Bu Njem, at the time of its excavation, was preserved in places to the level of the first storey ceiling and is accompanied by an archive of military documents recording the activities of the troops. The analysis is complimented by insights from Inchtuthil, as the best explored plan of a legionary base and 2nd century A.D. Vindolanda, with its tablets providing a wealth of details about the society of the base.

Having identified the gap in our understanding of the role of socially constructed space in the study of Roman military bases, this thesis investigates the archaeological and textual evidence for patterns of movement and presence within the base, the temporal variation in social activity in a military base and the way both community and institution of the army functioned in space. The topic of social use of space in the context of the Roman military bases has seen some attention in recent years, but has rarely been addressed as a primary research aim. No one has attempted to do it through integrating all available sources of data: literary data, the documents, the plans of sites and the artefactual record.

The Table of contents can be downloaded here.