Review of "Being Bedouin around Petra: Life at a World Heritage Site in the Twenty-First Century" by Mikkel Bille 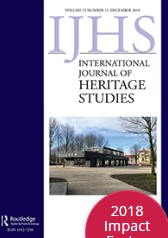 When the Nabatean architecture of Petra became a World Heritage Site in 1985, the decision triggered a cascade of changes to the lives of the nearby Bedouin population. Over twenty years later, local Bedouin culture, which laid beyond the agenda of the original World Heritage Site inscription, become the subject of its own nomination. Bille’s book takes the reader on a journey to explore multiple, and often competing agendas that shaped both nominations to achieve an understanding of what protection of tangible heritage, Bedouin culture and legitimate way to perform Islam mean in the local context of the daily praxis of the Ammarin tribe and in the context of Jordan’s national identity. With two separate World Heritage designations, Petra offers a unique conglomerate of heritage ideologies, which the book explores convincingly. The key frames of reference for Bille’s analysis are the role of Islam in negotiating heritage meaning, oscillating between the pluralism of the folk Islamic practice and the unifying push from high Islam, and the parallel ‘universalist’ power of UNESCO to shape what is deemed as heritage.