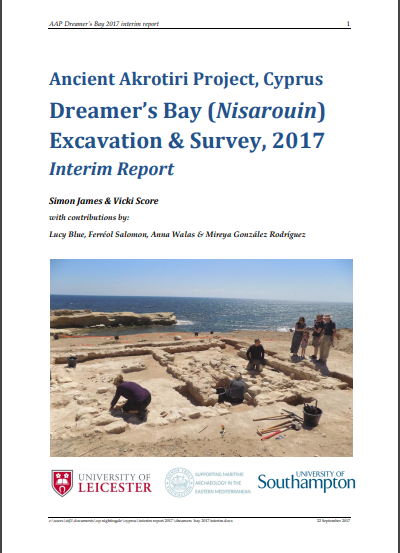 A third season of fieldwork was conducted on the ancient port at Dreamers Bay (Nisarouin), Akrotiri, at the southern tip of Cyprus during March 2017. This involved a campaign of excavation and survey by the University of Leicester Ancient Akrotiri Project team, which further investigated the sea-threatened shoreline remains of port buildings, and a broadly contemporaneous complex of structures on the hilltop overlooking the area. The shoreline excavations confirmed initial indications in 2016 that at least some of the buildings had collapsed, probably in an earthquake, likely the same which devastated the nearby city of Kourion in the mid-fourth century A.D. while some excavated buildings appear never to have been subsequently disturbed, others were apparently rebuilt, continuing in use during
the early Byzantine era. The extent of the hilltop complex was further elucidated, but more information is required before it can be properly understood. During the season, our colleagues in the University of Southampton returned to continue their geomorphological and archaeological work on understanding the nature of the harbour, and its setting in the context of the peninsula as a whole.
This year also saw an expansion of the project outreach programme, including a public open day and planning for future collaborations with local schools and the Akrotiri Environmental Education Centre.